Liveability has been a recent catch cry for media attention in the urban domain, and with so much analysis in the ‘most liveable city stakes’, perhaps it is timely to look at what constitutes urban and suburban quality of life. 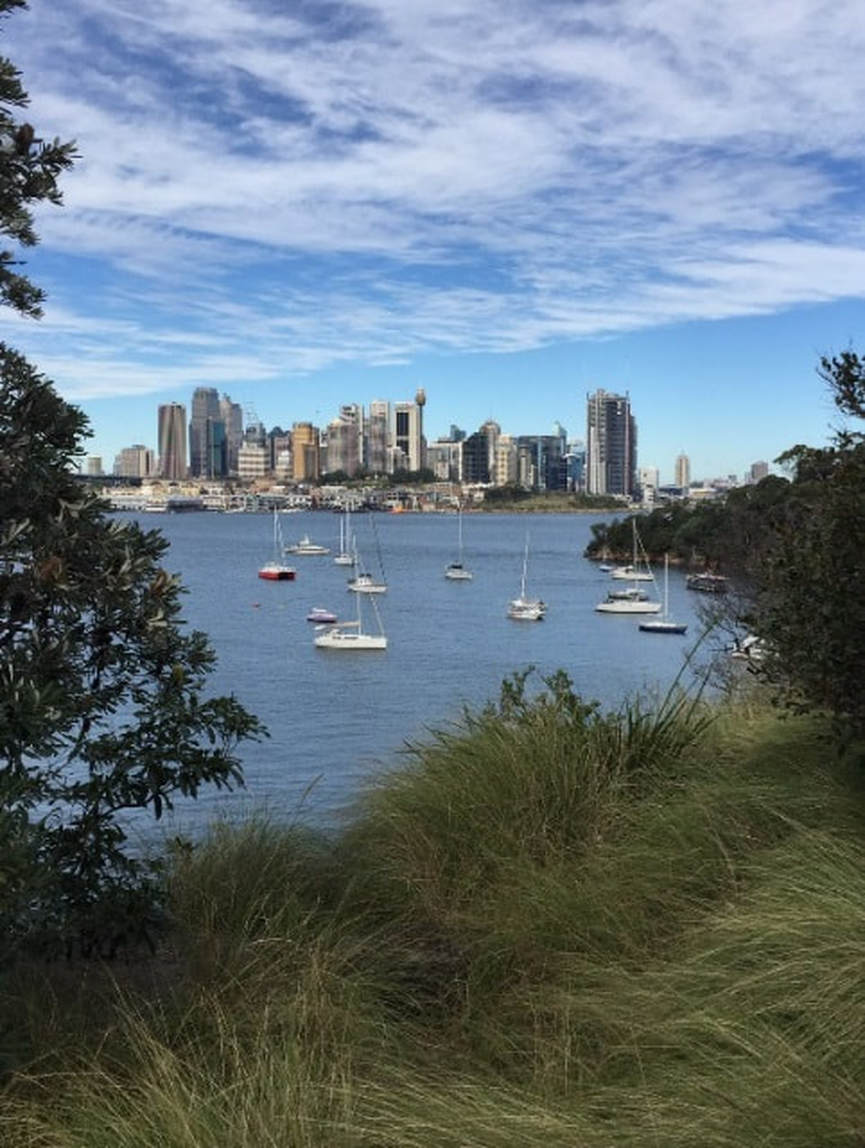 This photo is indicative of what many would consider a highly desirable component of the liveability stakes, and captures the quintessential Sydney Harbour ambience. But what proportion of our almost 5 million Sydney residents have direct access to such wonderful public open space with views to die for? 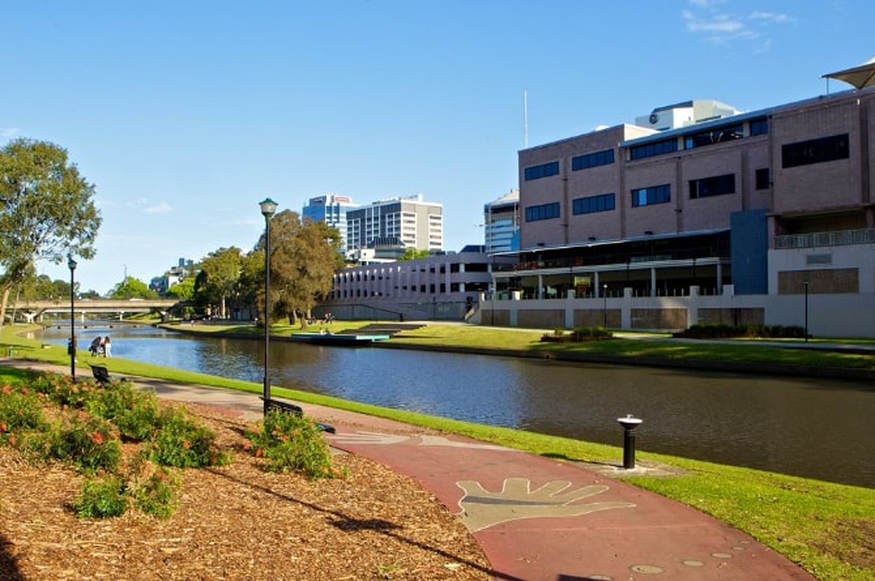 In an exercise undertaken in 2016 for the Sydney Morning Herald by Tract Consultants and Deloitte Access Economics, a total of 16 indicators were used to determine a suburb’s liveability, including transport, education, traffic, views, proximity to employment hubs and access to the beach.

The Lower North Shore fared very well, with Lane Cove coming in at No. 41, and Greenwich and Northwood even higher. Lavender Bay topped the list with the next six either side from Kirribilli around to Wollstonecraft, but all these suburbs are well down the list in the affordability category. A less tangible indicator, however, is sense of community – a critical part of cultural/social mix that I believe should have had ‘skin in the game’.

Lane Cove, where I have lived for the past 12 years, has seen a huge increase in unit dwellers in that period, and it would be good to know the breakdown of buyers to ascertain how many actually reside in the area. Judging by numbers of people around the Plaza, traffic congestion and queues for parking, this village has become a ‘Mecca’ for local shopping and entertaining, and without loss of our sense of community. Fortuitously, Lane Cove has ‘good bones’, having benefitted from its mix of public housing, aged care and seniors accommodation along with younger families attracted to single houses and townhouses close to many of the liveability indices – with one caveat. Don’t mention the traffic! 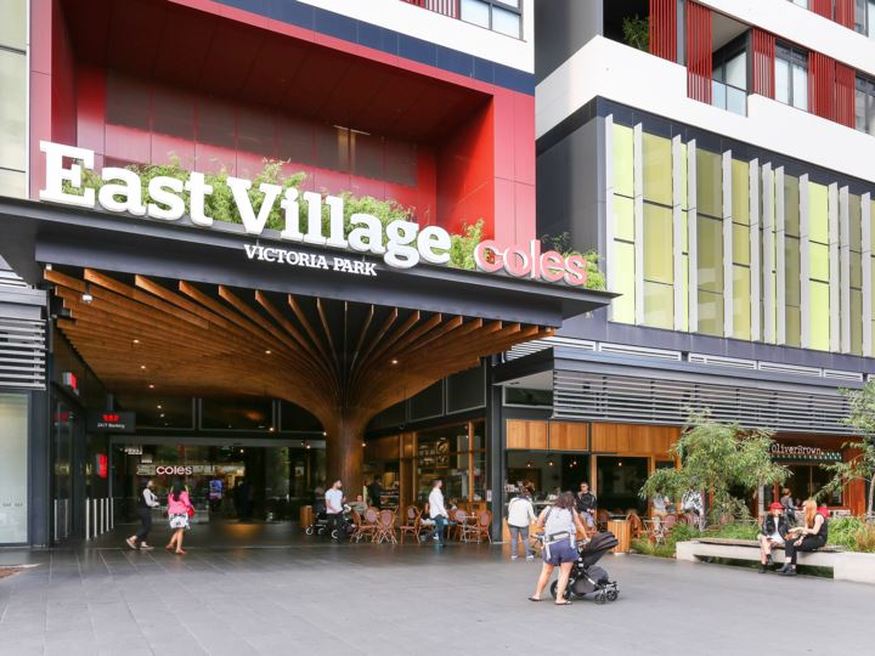 Some recent higher density areas such as East Village and Victoria Park near Zetland seem to have become investor suburbs. With only around one third of units in the hands of owner-occupiers, the result is a high proportion of short term tenants who contribute little to the creation of a real sense of community. Clearly most developers are out for profit, and a high proportion of these have recently come from overseas, with little interest beyond their return on investment. For this sector, local character is judged by its capacity to draw market interest and add to future resale.

But with bias towards short term tenants over owner/occupiers, there will always be lost potential for a real community to be built and maintained. Recent pressure for targets in key worker or affordable housing, and potential for more urban seniors/retirement living, will help raise the level of longer term residents, with a greater stake in the community and the capacity to contribute to it.

The term ‘inclusionary zoning’ has recently emerged as a strategy to require a proportion of key worker accommodation in new residential developments – but with inevitable pushback from a development industry concerned about potential effects on yield and profit margin. This could offer some very significant benefits that might not seem so obvious to those more interested in return on investment, and is a key to growing connections between more balanced communities that underpin liveability potential.

Zoning or planning code changes to allow for more ‘mix’ in the mixed use definition are necessary, along with design thinking around how to better guide local village life. The latest Government Architect’s Office release of the publication ‘Better Placed’ is a further positive move for support of place-making in this direction.

Pressures on lifestyle from commuting, and less time for socialising with friends and neighbours, have diminished our social capital, and as SMH journalist Ross Gittins wrote recently - “There’s plenty of research showing these things are strongly linked to the wellbeing of individuals and communities”. Social capital feeds ‘a sense of community’ which is in turn fundamental to liveability.

New inner urban development should, in addition to the stock standard units, include more provision for social housing, low-cost affordable housing, and intermediate accommodation for retirees. A resultant more inclusive residential mix can then help build connections between neighbours and communities, creating social networks and sharing service opportunities that can cross age, cultural and social barriers – and make the potential for urban liveability more believable.
Victoria is also experiencing challenges in the liveability stakes – but seems to be a bit ahead of Sydney at this stage…., 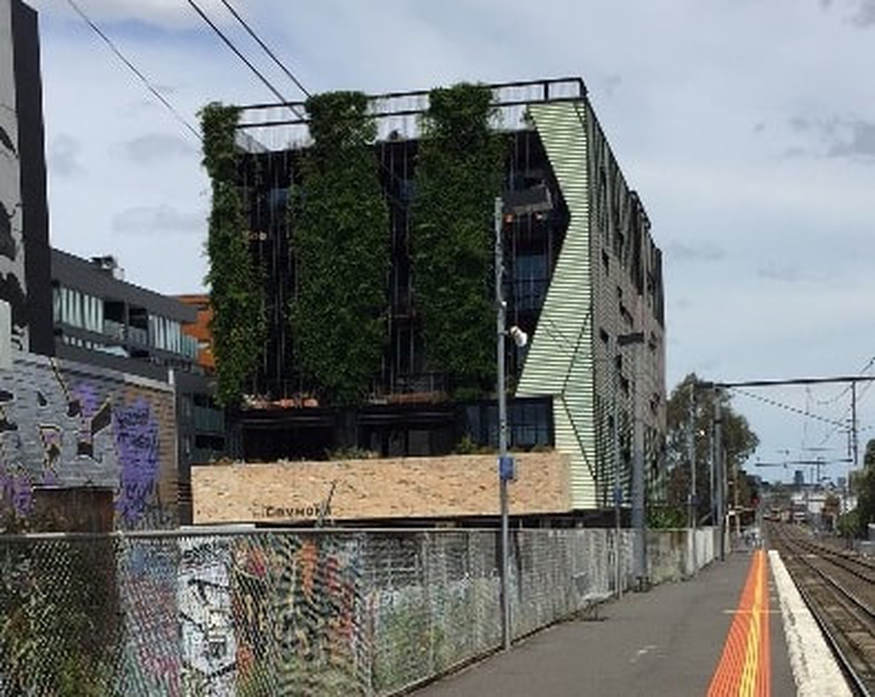 On a visit to Melbourne earlier this month, I had the privilege of visiting The Commons, an extraordinary and seemingly successful co-housing development in Florence St. Brunswick. Initiated by Jeremy McLeod of Breathe Architecture, this is a truly imaginative outcome by not-for-profit social enterprise that exists to support, promote and advocate for high-quality housing that is ecologically, socially, financially sustainable. (nightingalehousing.org) 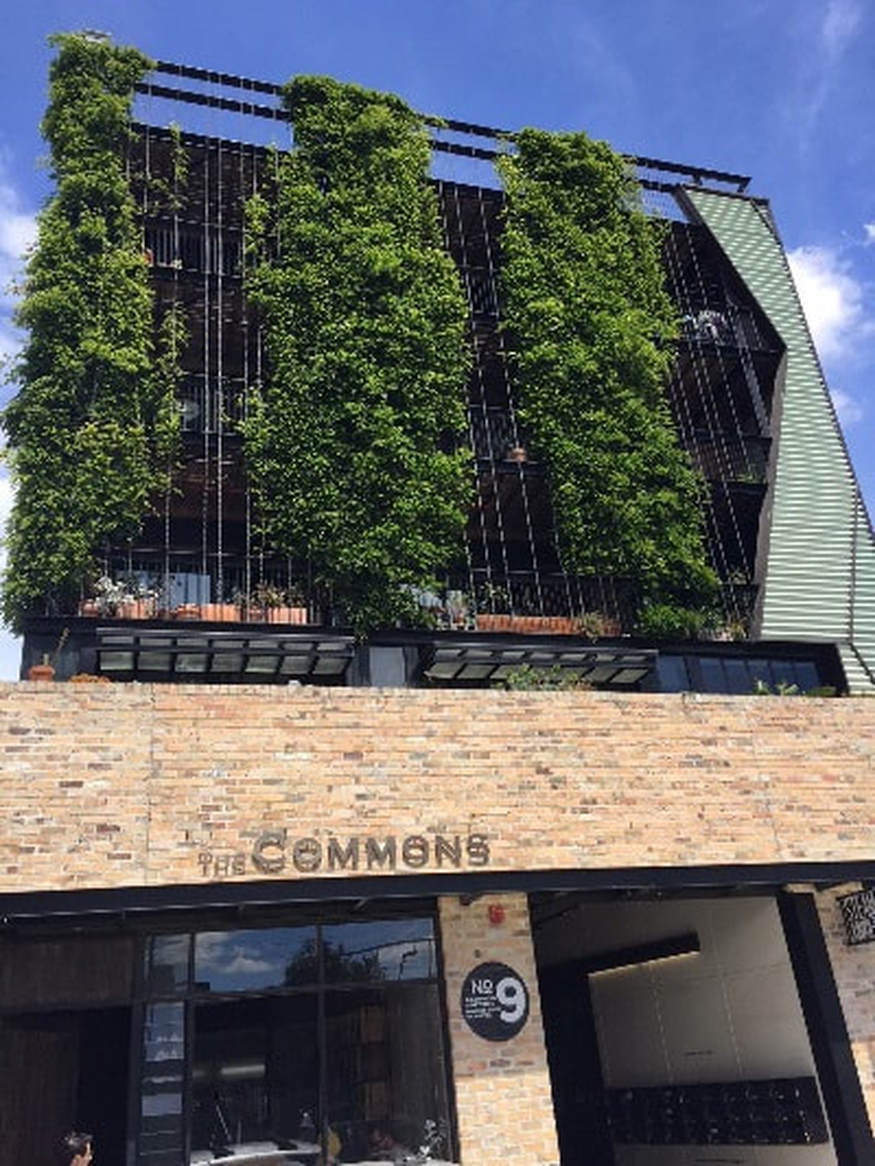 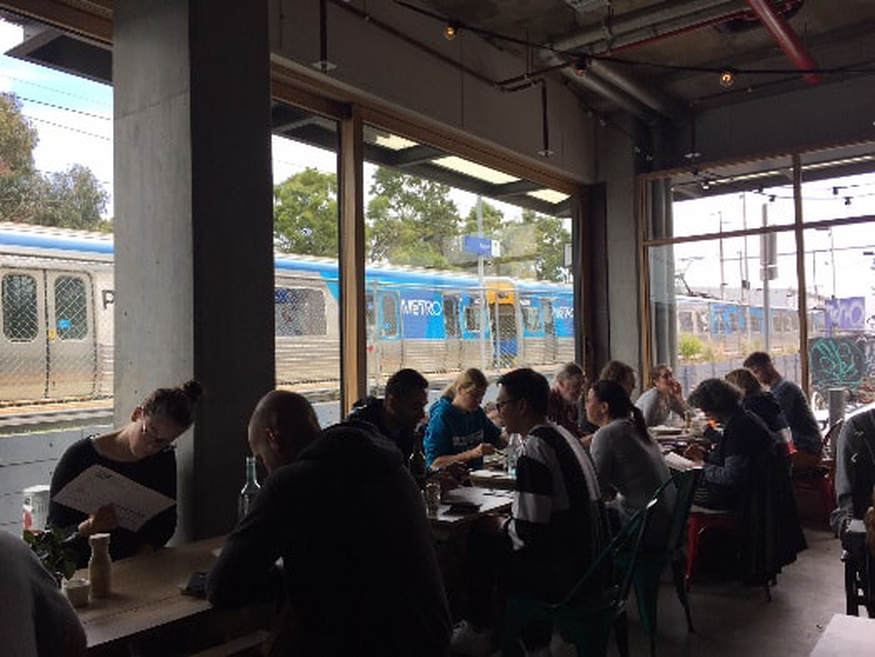 Steam Junkies Café at The Commons in Brunswick

The Commons has been a prototype for the Nightingale model that is now being pursued by a number of consortia of like-minded co-housing aspirants for more sites in Melbourne, Sydney and Fremantle, based on this collaboration of principles -
​ 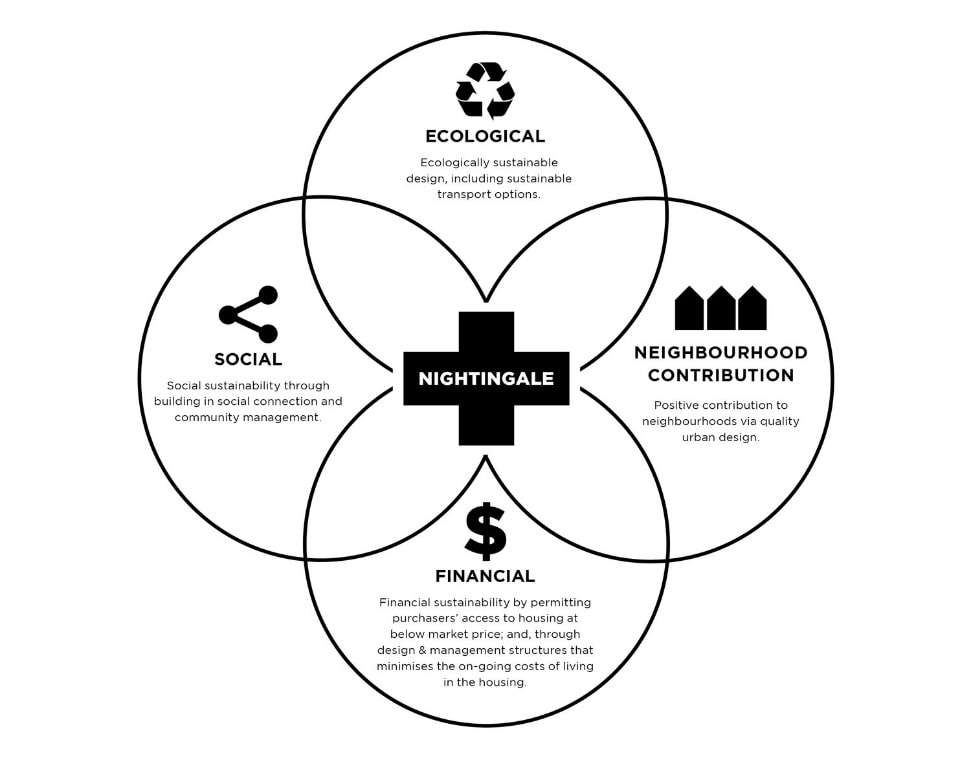 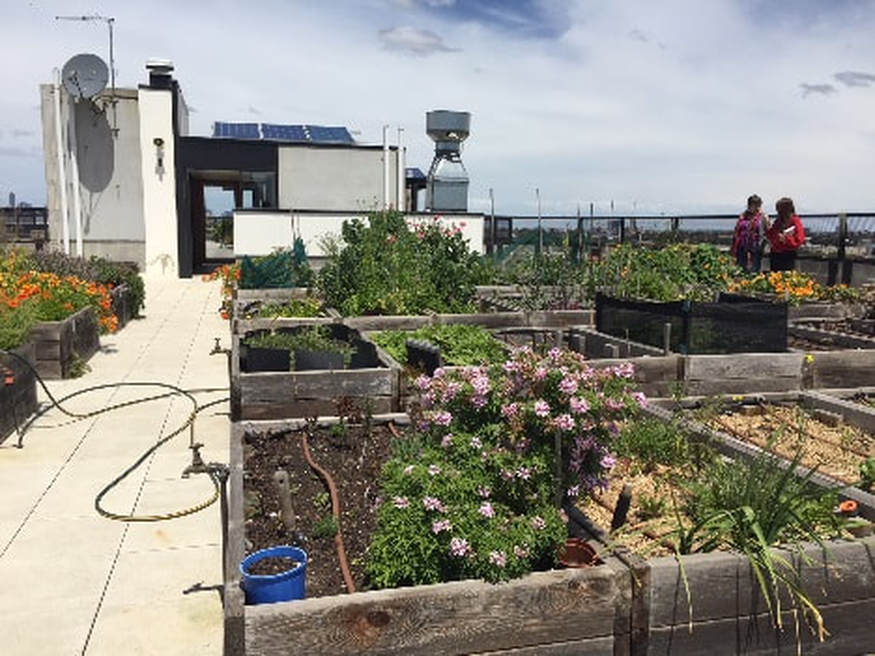 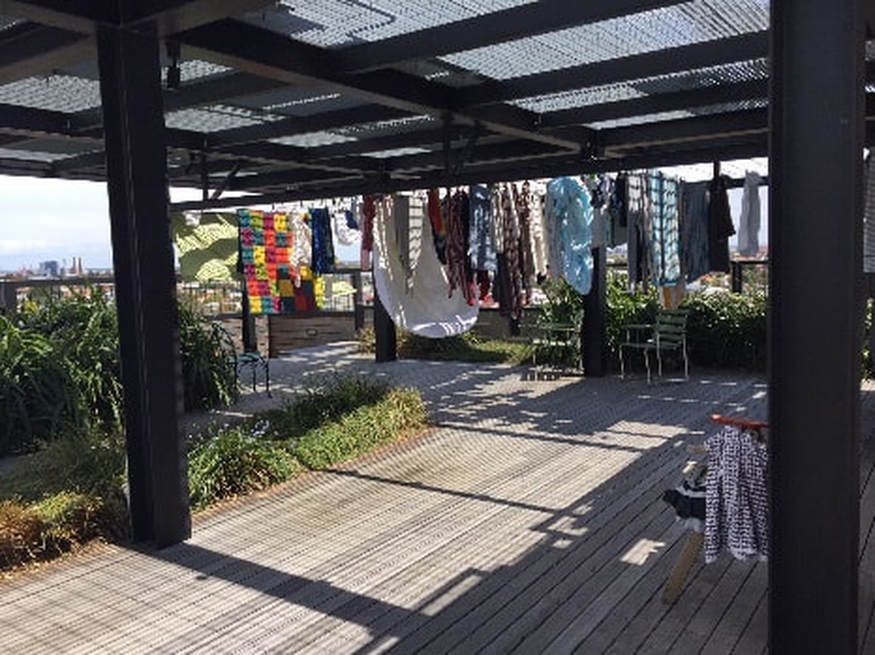 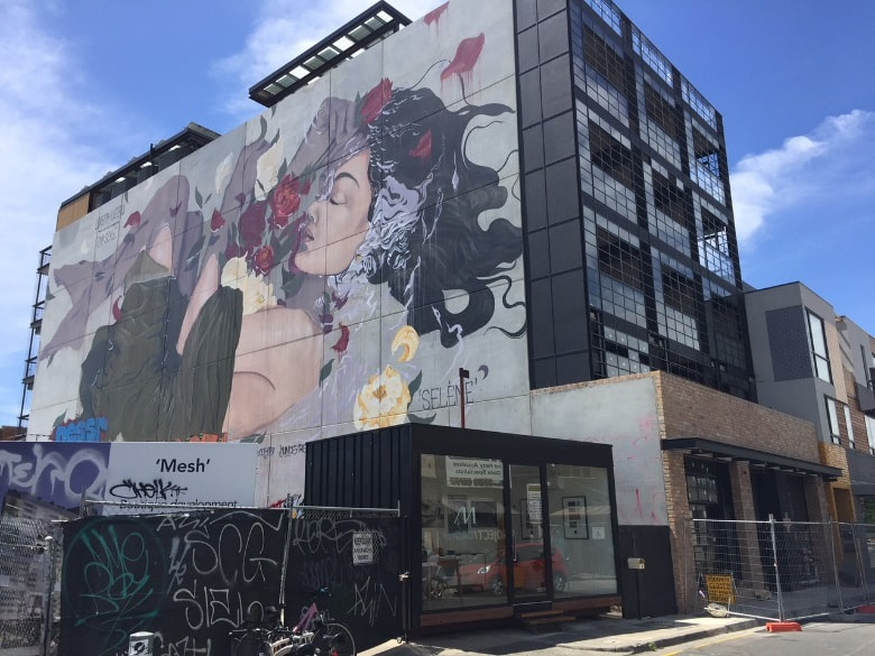 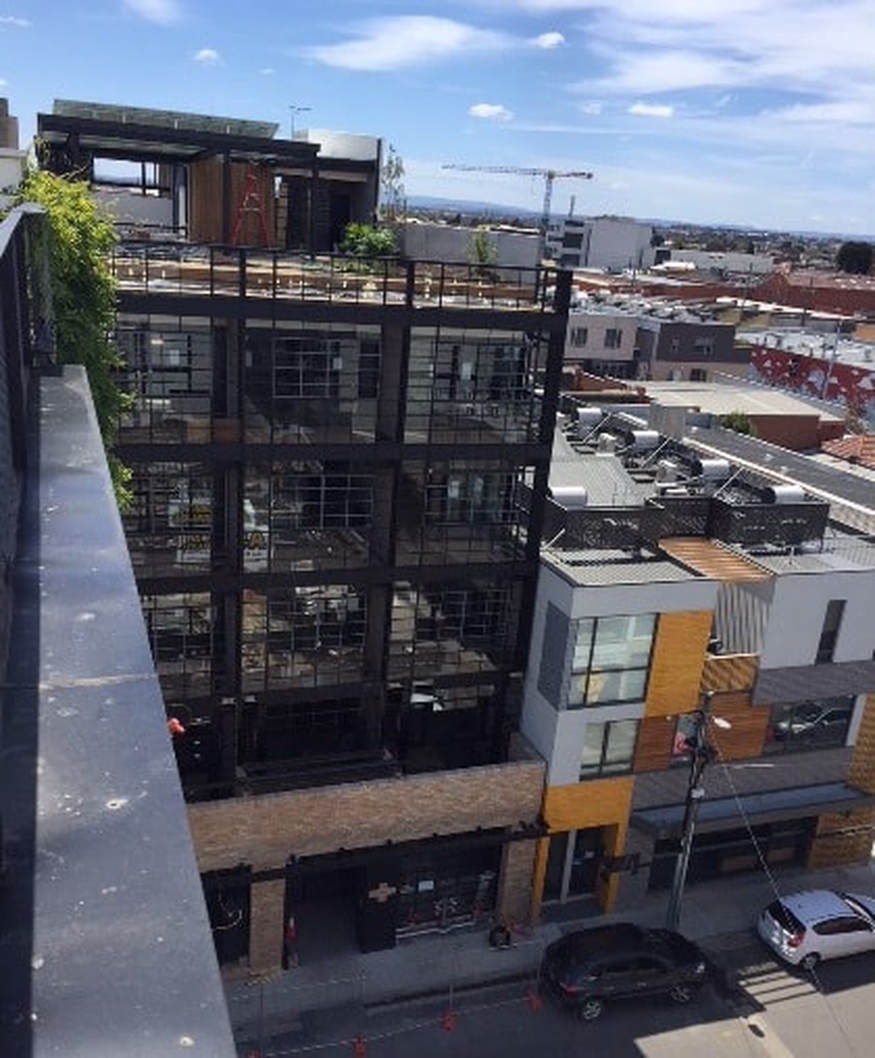 After lunch at the Steam Junkies café off the foyer of The Commons (leading to the bike park and Breathe’s studio), I had a short tour of the roof top communal roof garden, shared laundrette and drying terrace beneath the solar panel array with panoramic views back to Melbourne, and the recycling depot at ground level with organised compost and worm farms.

​This model of affordable housing with 24 units costing around $560,000 each, promotes social cohesion via shared interests, design thinking, risk taking and collaboration – and the next iteration – in Nightingale 1 on the other side of Florence Street – is about to take this to the next level.

​While these schemes have had to battle VCAT (the Victorian Civil and Administrative Tribunal) for development approval with a host of admirable sustainable and environmental initiatives and no or minimal parking, at the top end of town the Australia 108 development with 1,105 units and 800 car spaces on Southbank has sailed through approvals, and is now at around Level 42 of its eventual 100 storeys. Designed by Fender Katsalidis Architects, this is development for the wealthy investor and well-heeled penthouse seeker – and is a story that deserves another article.- 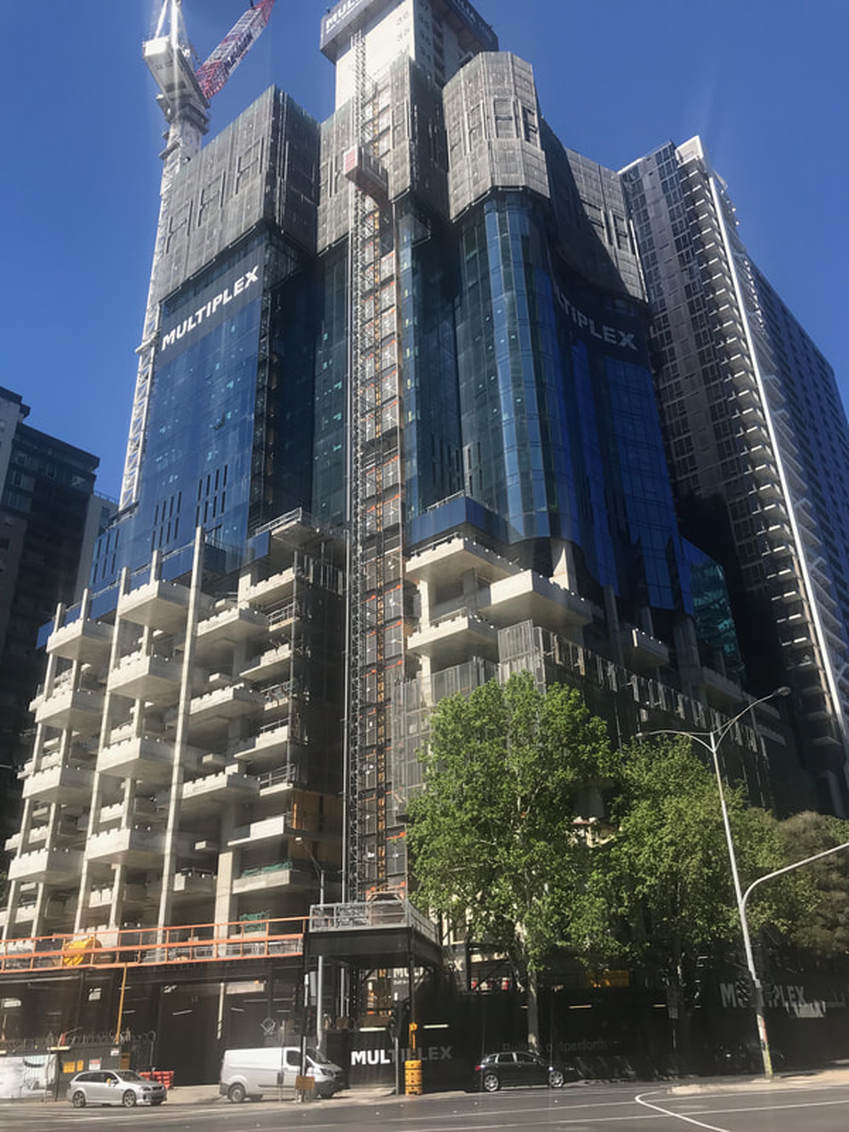 Want to join the discussion?
Feel free to contribute!

31-33 Bank Street, Mcmahons Point ‘Landmark Home Like No Other’